The Valthungian Calendar & The Measurement of Time

The Valthungian Calendar is fairly complex, compared to most, and that is largely due to trying to cram three different competing calendar systems into one. It didn’t work, and at a certain point they just cut their losses and kept using the monstrous system they had.

Ultimately, the calendar is a fairly standard solar calendar, beginning each new year on the Winter Solstice. The coming year, 2020, will be 1610 in the Valthungian Calendar. Years are numbered starting from the Sacking of Rome in 410ad; to calculate the Valthungian year, simply subtract 410 from the current Gregorian year unless you happen to be in the period between the Winter Solstice and January 1st, in which case you should probably find something more productive to do.

The year consists of twenty-eight overlapping months: the standard Gregorian twelve (because it remains important to keep in sync with the rest of the world) and sixteen traditional months: eight standard and eight “short months.” The months are based on the same astronomical calculations that make up the twenty-four Solar Terms of the Chinese calendar, though not every Solar Term is a month. A new months starts at the beginning of each zodiac sign and at each of the four “cross-quarters,” i.e. the points between the solstices and equinoxes.

The traditional months are mostly named for traditional Germanic months, and have many counterparts in Old English, Old High German, and others.

A typical Valthungian calendar combines these two systems generally with the traditional dates at the top of each cell and the Gregorian at the bottom. See, for example, the first few weeks of the coming year: 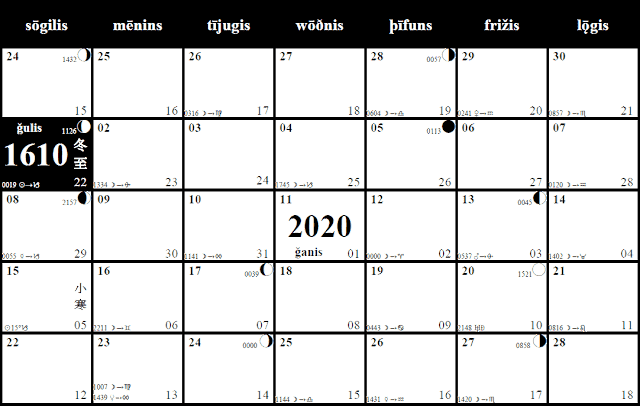 (You can also see from the example that the words mēnaþs ‘month’ and daǧ ‘day’ are left off most calendars as unnecessary.)

The days of the week:

Also fairly obviously Germanic are the days of the week: