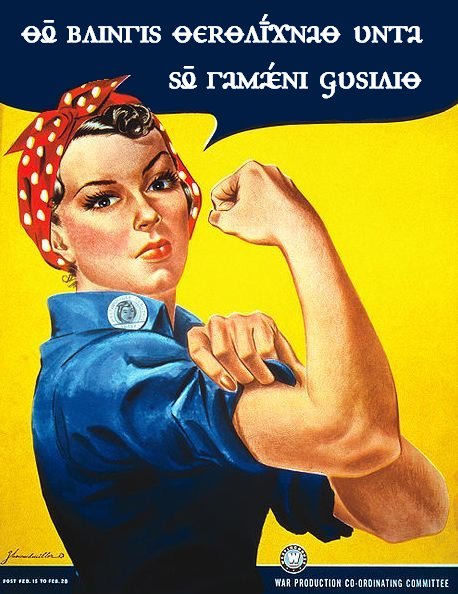 Minor Updates: Most of this is going on behind the scenes at the moment!

It’s been a while since I’ve posted anything about Gutish, so I thought I should add a quick update. I’ve been doing a fair amount of work on it, but most of that work is a little more abstract than can fit conveniently into a blog, so I just want to give you an update of some of the highlights.

The diachronic rules for the transition from Gothic to Gutish are more or less complete. That’s not to say I might not make a few small changes going forward to make the pronunciation more palatable, but most of the kinks are worked out at this point. The latest version of the rules can be found here: https://drive.google.com/open?id=0B9A-V86hffwbSTJuWkVac2Ziemc

I’ve created a font for writing Gutish characters, which I presented in a rudimentary fashion back in 2013. To clarify: I didn’t actually create a font, per se, but I modified the existing Junicode font to include Gutish characters which were based on the same style. Here’s the alphabet and a sample text:

For the most part I’ve been using a Romanization of Gutish, but some of the characters have been nagging at me. I finally solved the things that have been bothering me in a couple of ways:

The lexicon that appears on the Gutish website is a little out of date – I know, I know. I’ve been working on a new style of lexicon that I haven’t quite perfected yet. For the time being, I’m keeping the corpus of the lexicon in a Google spreadsheet, and if I get it working correctly, I should be able to just click a few buttons, run a mail merge, and generate a new version of the lexicon at will. At the moment, though, the lexicon is just a tangled mass of “if” statements and arrayformulas. This is actually where I’ve done the greatest amount of work on the language recently, and also the area that least lends itself to being newsworthy.
at September 05, 2015 No comments:

Aesop's Fables: The Goatherd and the Goat